The Importance of Cow Body Condition Score (BCS) at Calving 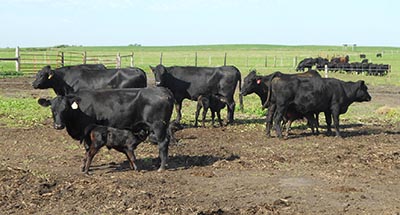 AMES, Iowa – Body Condition Scores (BCS) are used to assess and describe the amount of fat cover, or condition, being carried by an animal. For beef cattle, the BCS system ranges from 1 to 9, with numbers increasing with increasing fat cover. BCS of 1 would be extremely emaciated, 5 would be average and 9 would be extremely obese. Scores are determined based on prominence of bony landmarks and degree of fat accumulation at certain anatomical locations. BCS at calving is an important predictor of numerous important outcomes such as dystocia, calf vigor, quantity and quality of colostrum, postpartum intervals, return to estrus, and subsequent pregnancy. Very simply, BCS of 5-6 at calving time should be the goal. And to a point, those with greater BCS at calving tend to perform better in almost every aspect of production. Chris Clark, Iowa State University extension beef specialist, said it is important for producers to analyze BCS at calving and other key times of the year.

“As spring calving season progresses, it is important to analyze BCS, and adjust the diet as necessary,” he said. “For producers calving heavily right now, it may almost seem too late to make big changes in BCS. Ideally, producers would analyze BCS 60-90 days prior to calving to allow time to achieve changes in BCS by calving time. But regardless of the timing, knowledge of current BCS can help with decisions about diet moving forward.”

For those calving now at less-than-ideal BCS, it will likely be difficult and expensive to improve BCS in lactating females. It is necessary, however, to try. A good plane of nutrition will be critical to support lactation and return to estrus. Moreover, for those females that will not calve until April or May, improving the plane of nutrition even during the last 30 days of gestation can improve outcomes. There is an often-cited study from the 1970s that showed greater calf health, survival and performance when cows were fed a higher energy diet in the last 30 days of gestation.

“It can be challenging and expensive to improve BCS in lactating females but basically there is no other choice than to work at it. Beyond supporting lactation, we need to improve BCS in order for them to rebreed in a timely manner,” Clark said. “Thin females tend to have longer postpartum intervals or slower return to estrus and they tend to have lower pregnancy rates in subsequent breeding seasons.”

Many calves in the Midwest are born in March and early April, well ahead of adequate grass growth for grazing. In the meantime, producers must formulate, prepare, and deliver diets that will support lactation and any required gain in BCS. Moreover, thin cows and first-calf heifers may benefit from some supplementation even while grazing.

“Even for cows in good condition, they need some extra groceries when lactating and it is really important to adjust diets for lactating females, especially thin, lactating females. We still have some time before we’ll have good grass so producers may need to offer a relatively energy-dense diet during those last few weeks of winter feeding,” Clark said. “Generally speaking, pasture quality in Iowa is adequate to support lactation and forage quantity is usually the limiting factor. But for thin cows where we’re trying to add condition and first-calf heifers where they often struggle to maintain condition during that first lactation, supplementation can sometimes be very helpful.”

Adequate BCS at calving and adequate post-calving nutrition is critical to support not only lactation and growth of the calf but also the health and reproductive performance of the dam. BCS is a major factor determining postpartum interval and subsequent pregnancy rates. Adequate nutrition will help females raise this year’s calf and rebreed with next year’s calf. Producers should evaluate BCS this spring to aid in developing diets for late gestation and early lactation.

The Iowa Beef Center at Iowa State University was established in 1996 with the goal of supporting the growth and vitality of the state’s beef cattle industry. It comprises faculty and staff from Iowa State University Extension and Outreach, College of Agriculture and Life Sciences and College of Veterinary Medicine, and works to develop and deliver the latest research-based information regarding the beef cattle industry. For more information about IBC, visit www.iowabeefcenter.org.